In a rainstorm at 3 in the morning, we stood on the splintery, worn deck. The sound of rain drops falling, pattering through planes of branches and leaves on their way to the ground, was omnipresent. Thousands of white flecks of misty and fat rain glistened in the lone porch light, but we did not get wet.
I walked the perimeter of the deck and then out onto the yard. Still, I did not get wet. We wiped the plastic arms of patio furniture and thin pools layered over them again, immediately, after our hands glided along them and then away and then were returned. We smoked quickly and tried to disavow ourselves of this miracle. On previous nights, under similar circumstances in this very same spot, we had discussed religion and physics—creation, quantum mechanics, and the Theory of Everything. It was odd that we would be the ones to experience something unexplained.
Patter of drops still continuing, field-stripped cigarette cherries kicked out in the grass, dulled, and we went inside and finished our whiskeys and then dreamed. 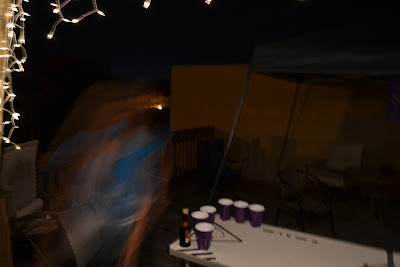 772. On Atheism's Popularity on the Internet

Disclaimer: this is another I wanted to put this on Facebook but didn't want to get in big arguments all day long blog post. You took the time to follow this here -- I didn't "force myself" into your news feed. I'm open to discussion, of course. But let's be civil. :-)

On www.reddit.com, the "front page" of the Internet, one of the major topic categories (meaning, most popular amongst its millions of users) is "atheism." Seriously, out of all the topics on the planet, why do some atheists spend so much time talking about something they don't believe in? If I were an atheist, this would seem illogical to me, and a waste of time. Unless I thought I was doing the world a service by trying to "enlighten" people and get rid of religion. But, again, I guess I'm just not the kind of asshole who tries to force people into what they should believe.

Posted by Dario DiBattista at 11:31 AM 4 comments:

This is just a snippet. Re-posted from Outside In Travel Magazine who just published this piece! Woot! Click here to read the entire story! :-)

"In the summer of 2001, my best friend and I exchanged our rock and roll dreams for military service. Dispassionate barbers trimmed curly mop-tops into sandpaper buzz-cuts. Piercings and prickly beards were replaced with the poster boy regulations of the image-obsessed Marines. And rifles replaced our sticks and picks.

September 11th occurred just a few months after we had shipped to boot camp. We knew then that our rock star fantasies would be forever replaced by the dark reality of unending global war. Our commander-in-chief told everyone this during his state of the union address after the towers fell. In addition to Afghanistan, Iran was coming. Iraq was coming. North Korea was coming. One of those damned countries was going to be destroyed; and we knew we’d be there, quietly wishing to return to the music that meant everything to us. In our lives, there’s never been a stronger love or a more fervent connection.

At 13, Ryan (a man I call my heterosexual life mate) was a guitar virtuoso, even subbing in at Baltimore biker bars for bands that his parents knew. In his free time, he set about learning every single Metallica guitar solo by ear just because he could. A radio tower near his one-story home in Perry Hall, Maryland used to project classic rock through his half-stack Marshall amp. He’d just raise the volume knob and lick along with Hendrix, Clapton, Frampton, Page, and other greats.

I never was so good back then. But I played the drums, and drummers were always needed, so I became functional since so many bands sought me out. I never turned down any requests for my services. I played in indie bands, punk bands, alternative bands, jam bands, blues bands, acoustic bands, hardcore bands, and experimental bands.

The highlight of my career still is the Perry Hall High School Showcase of the Bands in the Spring of 2000. My group at the time, Pubescent Weasel, intentionally created a wild, grating sound that was meant to offend everyone present in the auditorium. Beautiful people cringed when our singer leaped off the stage to scream into tiny blonde girls faces. I hit every drum and cymbal I could underneath his banshee yelling, not too concerned with any rhythm or beat. Over the wall of sound we created, our guitar player riffed out a hulking anthem of low frequency distortion. Inexplicably, everyone seemed to love us.

Despite our deep musical passion, like all graduates of high school facing the rest of their lives, we made our decisions about what to do next and suffered the consequences. In the following eight years after signing up to serve and shipping off, we’d live in eight states and seven different countries. Between us, we’d serve four combat tours, which would equal almost an entire year of each of our lives. And there would be no way to tabulate the number of rockets, mortars, IEDs, and bullets we’d see.

I can tell you how many of our friends died and how many memorial services I’ve attended, but I’d rather not.

It didn’t matter because we survived, and in the summer of 2009, in Trenton, New Jersey, the Gods of Rock would finally smile down and reward us with one night as rock stars..." 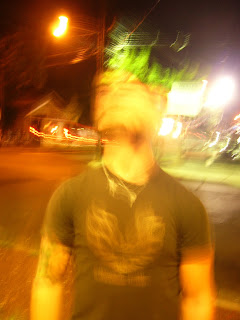 Posted by Dario DiBattista at 4:00 PM No comments:

Some of you people are so self-righteous on here. Usually when you're lambasting somebody else for acting the same way. From time to time, I disagree with at least one thing all of my friends say or post on here. But I don't pretend like my opinion is the right one or more valid. We all think we're so freaking smart, don't we? This is the American delusion. We shouldn't need social media to validate our beliefs.

Happy birthday, U.S.A.! There is a lot of conversation on my newsfeed today about is America great? Is it not? Yada yada yada. I think we're most critical of the ones we love the most. So, I'll say it first: I think you're the BEST, you crazy, freedom-loving, bomb-dropping, world police, isolationist, poor, rich, lower middle class, upper middle class, obese, fit, diverse, racist, tolerant, xenophobic, religious, atheistic, agnostic, monogamous, polygamous, conservative, liberal, reactionary, radical, nation!  You're the BEST because we can decide to be any of these things, truly any of these things. And even if I disagree (vehemently disagree) with someone for being any of these ways, they still have the freedom to make that choice. YES! FTW!

Anything else, to me, is a soft tyranny and not freedom.  More often than not, ideas win in the U.S.A -- not government mandates, or ancient cultures and traditions, a police state, or mobs and groupthink. And we're always evolving.

Are we perfect? No, sir, we have a lot of flaws. Are we really the best? Haha, I don't know. I've not lived in every other country on the planet to make a definitive opinion. Who has? But I like it here. I love it here. 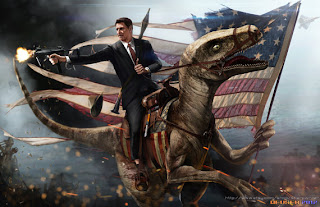 Photo by Jason Hueser -- Purchase this or another from his presidential collection!


(Sorry about two posts in a row about Ah-mur-i-ca!)
Posted by Dario DiBattista at 2:04 PM No comments:

They sell us a dream our whole lives, and then when we're poor and dejected after struggling for so many years and buying into those dreams, there's a man in a question mark suit on TV (get rich quick!), a bullshit online college degree program, an InventHelp, or a credit card debt consolidation company to continue to rape us of our dreams. This is where American Idol contestants come from: the tens of thousands of people each year who are delusional enough about their talent to embarrass themselves in front of millions. No one ever told them no. 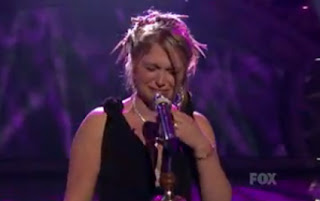 No photo credit.
No typical copyright statement by author.
Have a nice day.
Posted by Dario DiBattista at 10:40 AM No comments:

"Like the inuit using every trace of the beastly Leviathan to survive—wasting not, wanting not—Dario DiBattista has been slicing off big, fatty chunks of his six-year war memoir and selling it.

To the Washington Post and Connecticut Review; to Washingtonian magazine and the Three Quarter Review. To whoever will read it, because he "believes in the power that words have in this world."

His story is called Go Now, You Are Forgiven.

You wouldn't think a 28-year-old would have that much to say, especially in an age when, according to author and F. Scott Fitzgerald intimate Frances Kroll Ring, "our young people grow up faster and stay children longer." But DiBattista is the exception. A Marine lance corporal who finished boot camp just before 9/11, he served two tours of duty, used his VA benefits to go to school, became a writer, and now is adjunct professor at the Community College of Baltimore County-Catonsville. He makes an extra buck waiting tables at an Outback Steakhouse.

And he is decades wiser than the 17-year-old who graduated from Perry Hall High School in 2001..." 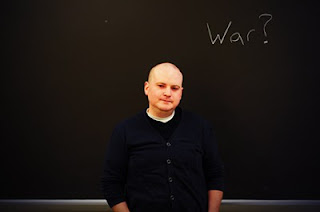 Photo by J.M. Giordano
Posted by Dario DiBattista at 1:48 PM No comments:

Dario DiBattista
Iraq War veteran Dario DiBattista is the Editor-in-Chief for 20 Something Magazine. An outstanding graduate of The Johns Hopkins University graduate writing program, his work has also been featured in The Washingtonian, The New York Times, The Washington Post, Connecticut Review, Three Quarter Review, World Hum, and many other places. His memoir, Go Now, You are Forgiven: A Memoir of War and Coming Home, will be published with BCG Books in early 2013. If you would like to know more, please feel free to email him at his website www.dariodibattista.com or www.20somethingmagazine.com